The youngest of my middles hasn’t picked up Arabic reading as quickly as the older three, so we are doing some remedial work. I worked up a little presentation for this as well as worksheets of writing practice for each letter and its forms. You can download those and some simple Arabic flashcards (previously posted at TJ) for those at TJ Arabic Studies:

You will need WinZip/WinRar, etc to unzip the files.

Posted by talibiddeenjr on June 15, 2011 in Arabic Alphabets 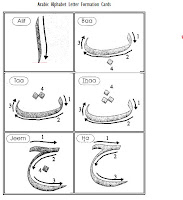 Posted by talibiddeenjr on March 11, 2011 in Arabic Alphabets

To help practice the connected forms of each letter of the Arabic alphabet, I’ve completed a series of worksheets.

There are four worksheets for each letter which allow students to practice each letter in 3 letter connected combinations:

If you are looking for practice of the standalone forms, you can find worksheets for those, here in sha Allah:

Posted by talibiddeenjr on February 18, 2011 in Arabic Alphabets, Arabic Handwriting

A bit ago, I received a comment from a visitor who was looking for names of Arabic letters and English equivalents, which is one (well one of many) things that I did not have.

I put together a little something to that effect (really basic).  Most of my present materials assume that the teacher knows the names and sounds of the letters, so I hope this helps for those who don’t.

Letter names/English “equivalents” (if any)
(Sometimes an equivalent is given, but it may not be 100% equivalent but is what is generally designated).

The letters are in alphabetical order, so please refer to one of my (or any other) alphabet chart to correlate if you are not able to recognize the letters by sight).

Alif – short A, e, or u (depending upon which short vowel is present on it), but it is mostly commonly used as an A in alphabet charts.
Baa-B
Taa – t

I would just rely on this for the teacher and not get into equivalents for the students. Many think that transliteration and comparing to English will serve as a crutch. However, for teachers  for whom Arabic is not their native language and who don’t have a teacher themselves, then it is probably essential in the beginning.

If you can find a book or software on tajweed, this will help more accurately with the pronunciation of sounds, in sha Allah, than what I have provided here.

Comments Off on Arabic Alphabet: Sounds, Names, and English Equivalents

Posted by talibiddeenjr on January 28, 2011 in Arabic Alphabets

Test student on all letters learned thus far and give student certificate of completion (make your own or see TJ’s Arabic alphabet section).

Be sure to review the flashcards on a daily basis as well as recite the alphabet in order. After a while, reduce review to weekly, then monthly as needed.

The next learning step is to learn the different forms of the letters of the alphabet……………….

Comments Off on Arabic Alphabet Lessons for Preschoolers: Lesson 14

Posted by talibiddeenjr on January 17, 2010 in Arabic Alphabets